Ross and Tom’s traditional music with a modern twist has earned them rave reviews for their energetic shows.

Check them out here on video for a glimpse of what a great night we’re in for.

See this link for more info and event details:
http://www.liveandlocal.org.uk/EventDetails.cfm?EventID=2530

Title: Ashley Hutchings and Ken Nicol presented by Ashley Hutchings
Location: Chinley, Buxworth and Brownisde Community Centre
Link out: Click here
Description: Not just one, but two of Britain’s greatest folk-rock legends join forces for a superb show. They have played for such eminent bands as ‘Fairport Convention’, ‘Steeleye Span’ and The Albion Band’.

Ashley Hutchings is known as the Father of British Folk-Rock and is often referred to as The Guv’nor. He co-founded legendary folk rock groups: Fairport Convention; Steeleye Span and The Albion Band. He is not only a musician and composer but also a poet and has been a musical director at the National Theatre. He has been performing in community venues for several years with his young group The Rainbow Chasers but this year he has joined forces with the exceptional Ken Nicol who was a long standing member of The Albion Band and was, until recently, the lead guitarist for Steeleye Span.

This special evening sees the two talented musicians perform songs from their new album ‘Copper, Russet and Gold. Ashley and Ken’s friendly banter, stories and anecdotes are always a joy as we get an insight into the phenomenal successes these two brilliant musicians have had. 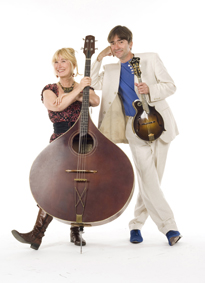 Sign up to receive our newsletter by email. Get information on our upcoming shows and advance notice of when tickets go on sale. We won't share your email address.